I’ve always dreamt of making my own “elaborate” broth for pho and this week I made those dreams come true!

This broth was actually very easy to make with my pressure cooker. My pressure cooker only holds 6 quarts, and it was over half filled with bones etc… but I wanted LOTS of broth for lunch tomorrow and to freeze for later… so I made 3 batches all with the same base ingredients! All in all it was easy to keep production going once I started.

Once you are finally ready to eat and enjoy the fruits of your labor, you can build your bowl however you’d like. I’ve listed the toppings I used on my pho down below. I’ve also used jalapeño, Thai chili peppers, and scallions. 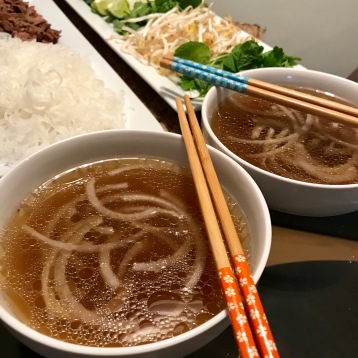 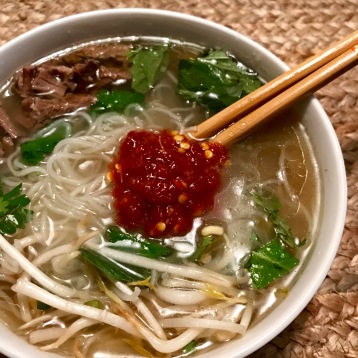 In the ingredient list here I will put the equivalent to 1 batch of broth in my 6 quart pressure cooker. If you want more than one batch, I have denoted the ingredients you will need to increase. Each batch yielded approximately 8 cups of broth (that’s a really rough estimate since I actually did not measure any of my yields). It gave me about 6-7 bowls of soup in each batch if that is a more accurate measure for you.

Place marrow and neck bones in a large pot, cover with water and bring to a boil for 5-10 minutes to clean the loose scum off the bones. Drain and rinse.

Place all the broth ingredients in your pressure cooker and fill with water to max fill line. Cook on high pressure for 1 hour, then allow for natural pressure release for 15 minutes before a manual release.

With oven mitts, carefully pour the contents of your pressure cooker into a pot with a strainer. Strain and remove the solids, placing the bones, beef brisket, ginger, and whatever remains of the onion (it basically disintegrates) back into your pressure cooker. Add a new onion, the new premeasured spices, fish sauce, and water to the max fill line. Repeat cooking process if you choose to make a second batch.

Set the broth in your fridge to cool so the fat rises to the surface. Skim the fat when you are able. Reheat broth and top with ingredients as you please.

Don’t forget to tag #whatsinbreesbelly to show me what you’ve made!

View all posts by whatsinbreesbelly